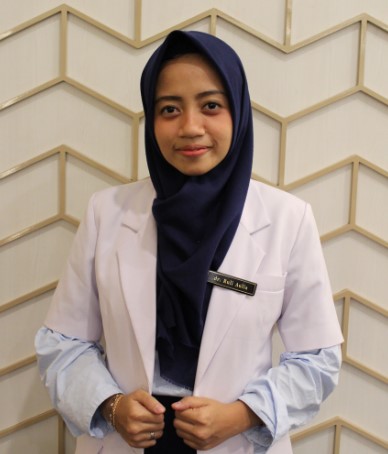 Chronic kidney disease is a worldwide health problem with high cost treatment. Basic health research (Riskesdas) in 2013 stated that the prevalence of the Indonesian with terminal stage kidney failure is as much as 0.2% or 2 patients in every 1000 people. This number will continue growing along with the increasing number of elderly people and also the increasing prevalence of patients with diabetes and hypertension.

There are various complications that might happen to patients with chronic kidney failure. Some of them are anemia, bone and mineral disorders, inflammatory. It is very important to prevent and manage the complications of the illness.  Less comprehensive treatment can lower the quality of life of patient and can also increase mortality.

Anemia in chronic kidney failure patient is caused by a variety of mechanisms (iron deficiency, folic acid, vitamin B12, gastrointestinal bleeding, hyper parathyroid, and systemic inflammatory), but it is generally caused by insufficient hormone of Erythropoietin (EPO). EPO stimulates the formation of functional red blood cells (erythrocytes). Along with the declining kidney function the production of EPO will decrease too; because most of EPO is produced by the endothelial cells in the proximal section of kidney renal tubular.

Patients will experience a variety of complaints - the manifestations of a decreasing oxygen delivered to the tissue and cardiovascular impact due to anemia. If not properly handled, these conditions get worsen the quality of life and increase the morbidity and mortality of the patients. The normal Hb percentage is no longer expected. American Food Drug and Administration (FDA) recommends Hb level for anemia patients is between 11 and 12 g/d

Since EPO deficiency is a main cause of anemia, giving an agent that can replace the functions of erythropoietin, or often called Erythropoiesis Stimulating Agent (ESA) is one of the best solution. Some types of ESA currently exists in the market  are Epoetin alfa, alfa Darbapoetin, Methoxy-polyethylene glycol-epoetin beta. The latest research is done to make Hypoxia-Inducible Factors (HIFs) Prolyl Hydroxylase Inhibitor (PHI) to overcome anemia in Chronic Kidney failure patient. Compared to ESA, PHI is currently believed to reduce cardiovascular effects. There are now four agents in phase 2 and 3, done in clinical trial in the U.S. (Gupta, Wish, 2017)

According to Indonesia Renal Registry (IRR) in 2016, 98% of the terminal stage kidney failure patients (stage 5) took hemodialysis therapy and the rest 2% took peritoneal dialysis therapy. During the process of dialysis, dialyzer membrane can cause the immunological response facilitated by IgG, complement component, and granulocyte. Active granulocytes in blood stimulates the release of reactive oxygen species (ROS) and this increases the oxidative stress. Several studies found that post dialysis patient had a decrease of trace element such as copper, zinc superoxide dismutase and (SOD). More over the kidney damage condition will also trigger the inflammatory that activates the macrophage, and stimulates IL-1. (Vadakedath, 2017) 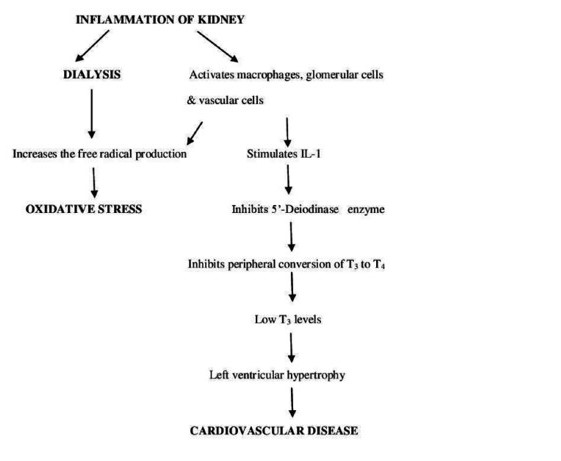 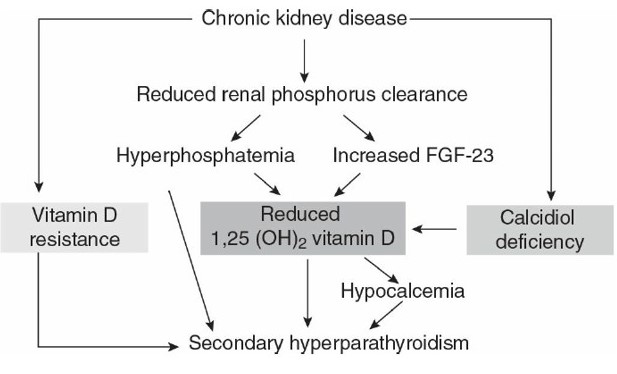 Image 3. Pathogenesis of abnormalities on mineral and bones (Lippincot William, 2017)


The increasing number of phosphor serum is a risk factor of mortality and cardiovascular for chronic kidney failure patients. The increasing phosphor serum is closely related to the inclining cardiovascular risk because it also increases the risk of vascular calcification and left ventricular hypertrophy. Research proved that hyperphosphatemia stimulates the growth of the parathyroid glandule and increases the secretion of pteroid hormone (PTH).

There are three hormone that play an important role in bone and mineral homeostasis i.e. FGF23, Calcitriol (1, 25dihydroxycholecalciferol), and parathyroid hormone (PTH). Along with the decline in kidney function, the body's ability to keep the balance of minerals and bone decreases as well. In the chronic kidney failure final stage, the low level of calcium and Calcitriol and high level of phosphor stimulates the secretion of PTH FGF23 and this worsens the conditions of hyper parathyroid. In pathology the hyper parathyroid triggers the cardiovascular disease because it damages the mineralized process of bone but helps the mineralized process in blood vessels and other tissues. Keeping away the vitamin D deficiency, maintaining normal levels of calcium and preventing us from hyperphosphatemia will hopefully avoid the increasing PTH. (Andhia, 2013)

The normal range of phosphate in the serum is 2.7 to 4.5 mg/dL (0.9-1.5 mmol/L), while the one of calcium is 8.4-10.2 mg/dL (2.10-2.55 mmol/L). Hyperphosphatemia can be overcome by taking high phosphate food diet restrictions, undergoing dialysis, consuming phosphorus binders agent and calcium. Calcium should be maintained in the normal range. Often time, high calcium level occurs due to excess use of calcium-based binders phosphorus. Deficiency of Vitamin D is frequently found in patients undergoing the dialysis treatment. There are several factors such as lack of sun exposure, and diet restriction to control the phosphate. Therapies for vitamin D deficiency still vary in some different countries. One of them is by using a natural precursor vitamin D which is cholecalciferol IE

An imbalanced bone regeneration can cause a variety of problems, such as the fibrous osteitis which occurs due to the continuously high PTH. The therapy for chronic kidney failure patients undergoing dialysis is to avoid the continuous hyperparathyroidism which causes severe bone fracture and tissue calcification. On the contrary, excessive therapy can cause a dynamic bone that triggers hypercalcemia and vascular calcification.

In the final stage of Chronic Kidney Failure condition, mortality due to cardiovascular diseases can be 10 to 30 times higher than the normal population. Chronic Kidney failure cause many of complications, one of the most dread complication is coronary heart disease. Two factors considered powerful to contribute the formation of atheroma in chronic kidney failure patient are inflammatory and blood vessel wall calcification. Research showed that the inflammatory processes, especially the C-reactive protein (CRP) has a direct effect on the formation of atherosclerosis. (Sagita, 2018). Moreover, diabetes patients undergoing the dialysis have a high risk of acute coronary syndrome and this is proven to be worse than the non-diabetes patients.

Regular check for hypertension should be done. Controlling the adequate hemodialysis and its treatment is also necessary. Patients with high cholesterol, have a high risk of atherogenic, however, patients with low cholesterol might be diagnosed to have malnutrition so whether high or low cholesterol has equal risk (Kilpatric, 2007).

Normal LDL-cholesterol levels is important to minimize myocardial risk; however, the initiation of statin treatment in chronic kidney disease patient is not clinically proven. Despite the fact that there is a decreasing level of LDL-C. Other cardiovascular problem that often occurs in dialysis patients is left ventricular hypertrophy. Some research provided data that risk factors such as anemia, systolic blood pressure, body liquid volume, mineral and bone disorders, can be modified by using the ACE-inhibitors and Angiotensin Receptor Blocker (ARB) which could improve the LVH condition of dialysis patient.

It is very important for dialysis patients with central nervous system (CNS),  to consider the structural damage and disruption caused by the levels of urea, In the edge nerve system uremic neuropathy frequently happens which usually aims the lower extremities and is characterized by abnormalities of the symmetrical distal which can be sensory and motoric polyneuropathy. The clinical manifestations could be paresthesia, dysesthesia, ataxia, and weakness. Often time the ability to detect the position and vibration is decreasing too.

Survey of dialysis patients shows that 40-50 % of the patients experienced sleep disorder. Usually these typical patients do not have psychological problem. The disorders can be problems to start sleeping and are often time awaken unreasonably. Other complaints are excessive daytime sleepiness (EDS). Patients undergoing the dialysis could fall asleep easily. Chronic EDS can interfere with cognitive function lower productivity and harm the patient who drives.

A research found that approximately 10% of chronic kidney failure patients with terminal stage have psychiatric disorder. The number of in-patient with psychiatric disorders is higher than that of the other chronic disorders. Common problems found in chronic kidney failure patients are depression, dementia, delirium, psychosis, personality disorder, anxiety and drug abuse. Other problems could be internal family problem, sexual dysfunction, socioeconomic and  quality of life.

Depression is one of the biggest psychiatric problems in dialysis patients. Diagnosis and treatment of depression in dialysis patients is very important because it is related to the patient commitment to undergo the dialysis therapy and medication in-take. Some of the methods that can be used for screening are the Beck Depression Inventory (BDI) and the Hamilton Rating Scale for Depression. Most cases of depression are currently underdiagnosed and incomprehensively taken care. Assessment to evaluate the cause of depression is important in planning the procedures. Some options are pharmacotherapy, psychotherapy (cognitive-behavioral, interpersonal and supportive).

Neurocognitive problems commonly happen to the end-stage kidney failure patients. Cognitive deficit is closely related to various clinical causes such as uremia. Anxiety often occurs to chronic kidney failure patients and it makes the patient's perception towards the quality of life declining. It is very important to explore the cause of the problem and find the solution and it is recommended that you begin with psychotherapy and behavioral technique.

Chronic Kidney Failure patient has a decreasing immunity due to the worsening function of lymphocytes and granulocytes. It is suspected that toxin is the cause of the problem, in addition to toxin, malnutrition and deficiency of vitamin D contributes to the decreasing immunity. This patient is more susceptible to infection, either virus or bacterial infection. Bacterial infections might be coming from the dialysis process, starting from the exit site to the dialysis machine. Hepatitis virus infection in patients with dialysis is linked to several risk factors: blood transfusion frequency, dialysis duration, types of dialysis, organ transplant history and intake of intravenous drugs.

Bacterial infections, which are not correlated to dialysis, such as urinary tract infections (UTI), pneumonia, TB and infection intra abdomen frequently occur. According to the research the tendency of chronic kidney failure patients having the UTI is quite high, particularly in patients with Polycystic renal.

Pulmonary problems that often happen to chronic kidney failure patients are pneumonia and TB. The test results of the excessive body fluid is often similar to pneumonia especially if bilateral infiltrates are found. Dialysis patients have the incidence of TB about ten times higher than the normal population. with an increasing mortality of up to 40%. Moreover, peritonitis is also dangerous for peritoneal dialysis (PD) patients consequently hygiene is must during fluid replacement in peritoneal dialysis (PD)