How to Prevent Chronic Kidney Disease 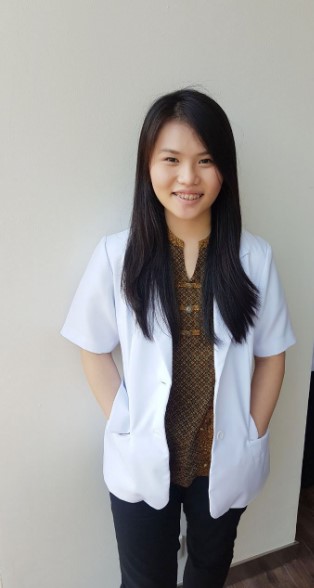 Chronic kidney disease (CKD) is the condition where the number of nefron continues to decrease drastically. According to the National Kidney Foundation, 10% of the world's population suffered from chronic kidney disease and in 2010 this disease ranked the 18th Death Cause in the world. The number of kidney failure may increase dramatically in some developing countries such as China, India and Indonesia where elderly people are the majority of the population. In 2004 Nephrology Society of Indonesia (Pernefri) stated that 12.5% of the population in Indonesia had kidney failure or over 25 million Indonesian suffered from chronic kidney disease.

In the early stage, chronic kidney disease has no symptoms. The disease reveals gradually after the progressive decline of the glomerulus filtration rate which is not specific and not significant until the glomerulus filtration rate is only a < 5-10 ml/min/1.73 m2.At this stage, the accumulation of the metabolic or uremia toxins occurs and causes the uremia syndrome with symtomps of limp, anorexia (lack of appetite), nausea, and vomiting.The patient or family member also states the problem of irritability, impaired memory, insomnia, restless leg syndrome, paresthesia and twitch. Pruritus (itching) with no rash can also be a common complaint. Pericarditis, a rare complication in chronic kidney disease can make pleuritic chest pain too. Drug toxinoccurs due to the decrease of renal clearance. Decreased renal clearance brings about the hypoglycemia (a condition where the sugar levels is below normal) because there is a problem with the insulin production. 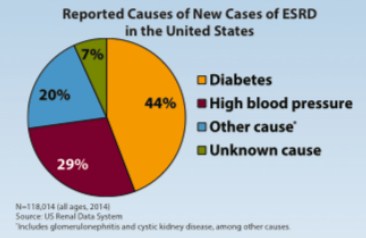 Hemodialysis is a process where the blood solution will be mixed with the other solution through a semipermiable membrane.

The main objective of hemodialysis is to take out the toxic nitrogenous substances from the patient's body then put it into the dialyzer that filters the blood and finally returns it to the patient's body. The dialysis cannot fullyfunction as the normal kidney, so most patients need additional therapy. For chronic kidney disease patients, hemodialysis treatment is used to holdthe declining of the glomerulus filtration rate. So hemodialysis is not to cure the chronic kidney disease, but to improve the quality life of the patient.

Since hemodialysis has limitted capability in helping the chronic renal patient, kidney transplant is the best possible cure. By kidney transplant the patient sufferering from CKD will have a healthy kidney to live the normal life. But kidney transplantion has some constraints; there is only a few kidney donors and it is very costly. Due to the huge cost of treatment, we should maintain our health to prevent us from CKD. We do not need to spend a lot and to make big effort to do the prevention. According to the Cleveland Clinic, we just need to carry out the following simple actions :

According to the National Kidney Foundation, drinking enough water means consuming the right amount of water for ourselves. Many people often say "drink 8 glasses of water in 1 day". Different person needs different amount of water. It depends on age, climate, intensity of the activity. Pregnancy, breastfeeding, and disease can also influence the person’s need of water. Water is needed by the body to take out the waste of the blood metabolism through urine. Water can also keep the blood vessels remain open so that blood can flow easily to properly take the nutrients to the kidneys .When we are dehydrated, then it is difficult to deliver the nutrients.

Tips to make sure to have enough water consumption :

Diabetes is one of the major causes of chronic kidney disease. According to the American Diabetes Association, diabetes mellitus belongs to the metabolic disease with hyperglycemia traits which is caused by the abnormal insulin secretion or the insulin itself or both . Types of diabetes are :

Caused by the destruction of beta cells, which usually leads to absolute insulin deficiency caused by the autoimmune or idiopathic (unknown cause). This type commonly happens to young people.

Usually caused by insulin resistance and insulin deficiency from moderate to severe. This type usually happens to old people but it might also happen to young age.

This carbohydrate intolerance is found in pregnancy. The risk factors can be obisity, previous gestasional millitus diabetes, glucosuria (sugar in urine), genetical diabetes, repeated abortion, giving birth to abnormal babies or babies of more than 4 kilos and having preeklampsia record.


There are many complaints of illness from people with diabetes. Complaints should be taken into serious consideration if they are as follows:

Diagnoses of DM can be done in three ways :

1 ) If basic complaints found, andthe test result of instant plasma glucose is > 200 mg/dL then it can be concluded that the diagnoses of DM is positive.

2 ) If basic complaints found and the test result of fast period plasma glucose is 126 mg/dL.


Although TTGO (Oral glucose tolerance Test) which is conducted with 75 g of glucose is more sensitive compared to fast period plasma glucose test, TTGO has its own constraints as well. TTGO cannot be repeated and in real life it is rarely done becauseit requires special preparation. If the test result does not meet the normal criteria or DM, then the decision is taken from the results obtained, and it can be classified into groups of glucose tolerance disorder (TGT) or before meal blood glucose disorder (GDPT): 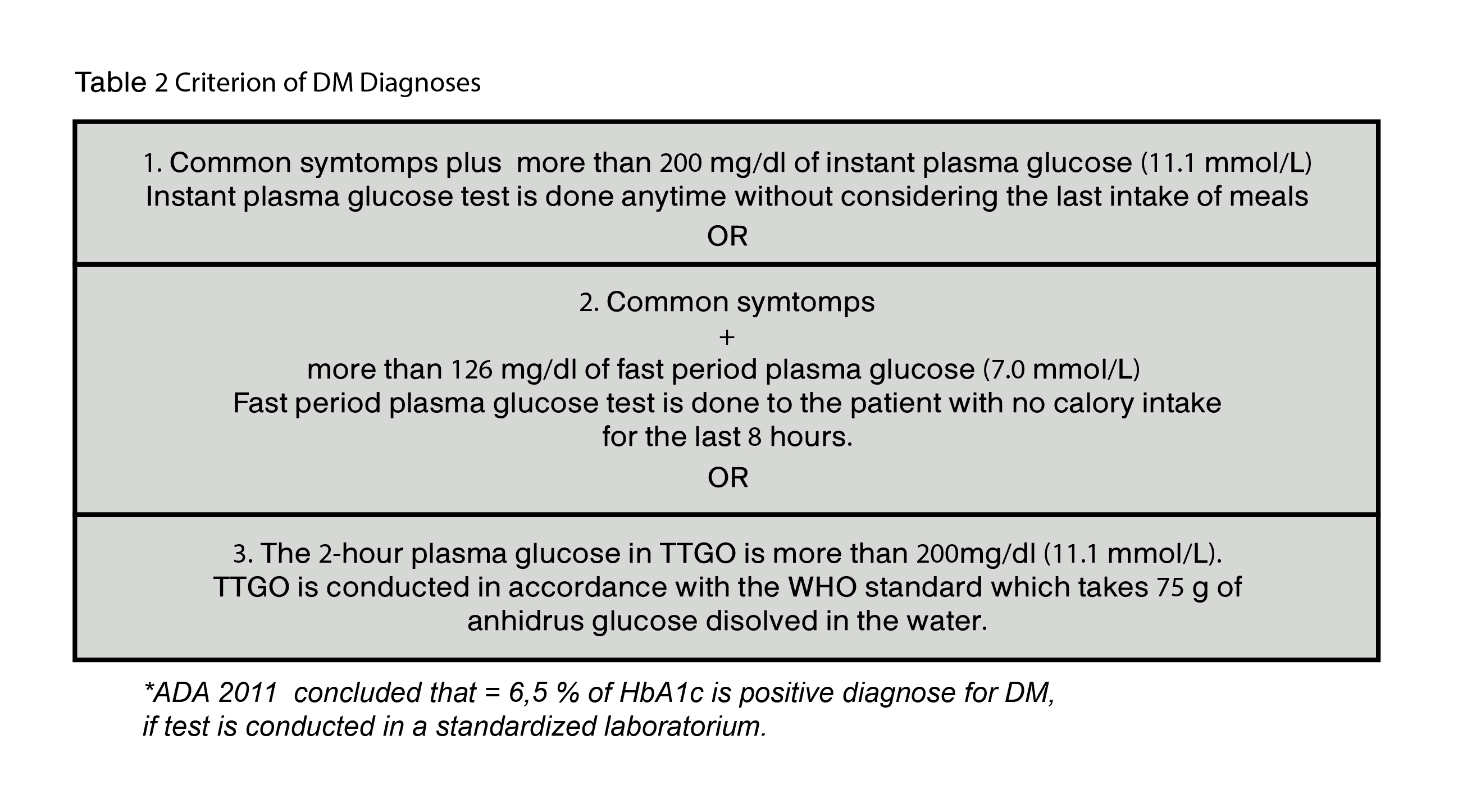 Blood Sugar Test for pregnant women with no risk of  DM can be done during 24-28 weeks of pregnancy. Some steps to be followed are :

The diagnose of gestasional diabetes mellitus is confirmed if : 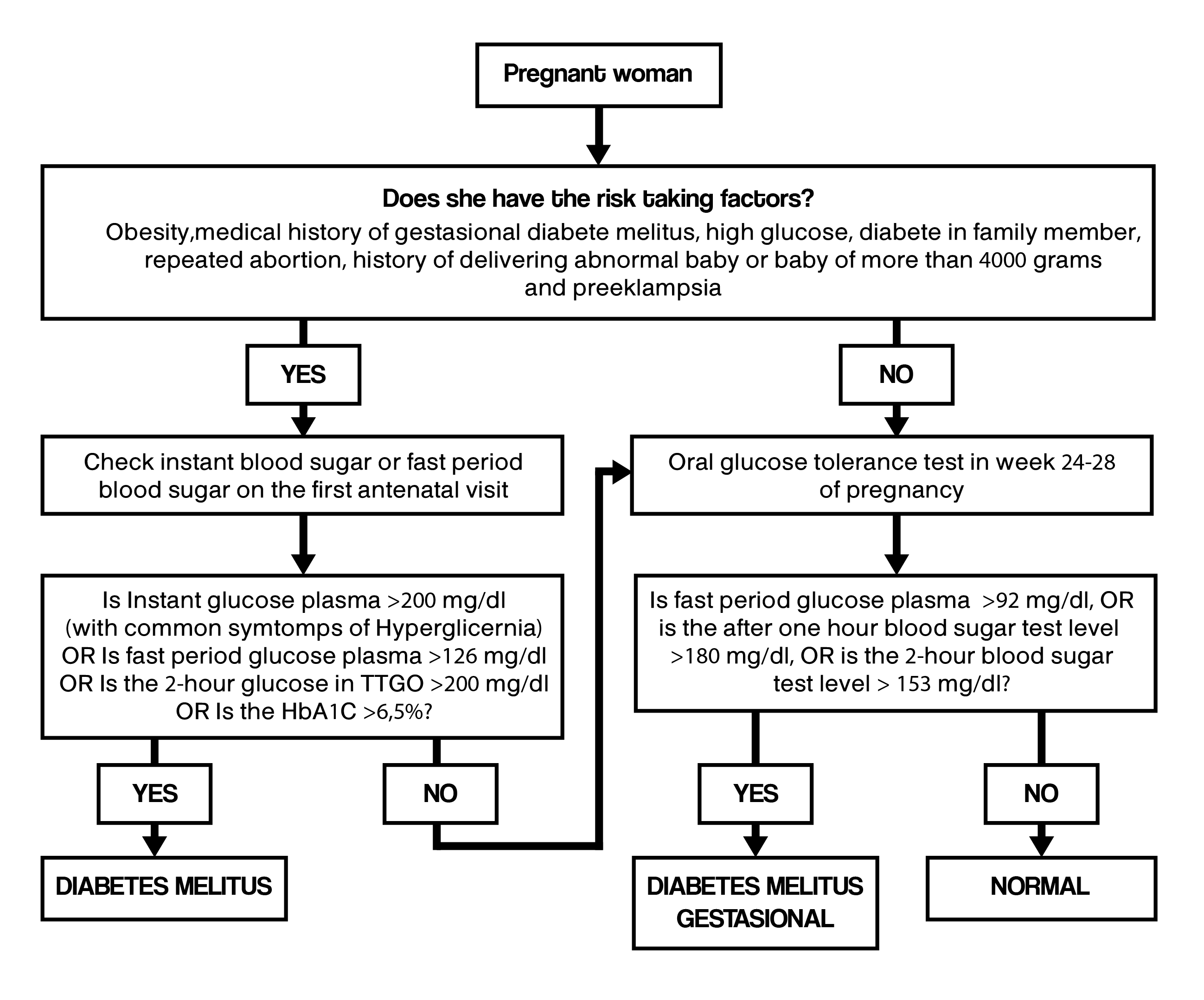 By doing the regular blood sugar test and reducing the sugar intake, we prevent our kidney from failure that triggers the chronic kidney disease because sugar can make stress oxidation to our body and eventually  damage our kidneys.

By checking our blood pressure regularly, we can early detect hypertension so that we can prevent ourselves from chronic kidney disease.

According to research, there is a close relationship between healthy food or super food and chronic disease (such as chronic kidney disease). Healthy food can hold  the oxidation of fatty acids. Oxidation is actually the normal process in the body but the huge amount of oxidation will create free radicals that can damage proteins, cell membrane and gen.

Healthy foods containing antioxidants can neutralize free radicals and protect the body. So consult the nearest doctor about good food to consume in order to prevent the excessive stress oxidation.

By doing the exercise regularly, we improve the function and the strength of muscle, control blood pressure, lower blood fat levels (cholestrol and triglycerides), have quality sleep and balanced weight.

4. Wisely use of food supplement and herbal medication

Smoking is one of the risk taking factors in chronic kidney disease. Just like sugar, smoking can also increase body stress oxidation and damage the kidneys. So, stop and avoid smoking as early as possible.

<< Back To Previous Page